We have adopted a whole school approach to the teaching of Spanish to all Nursery, KS1 and KS2 pupils.

Our aim is to develop the confidence and competence of each child in the foreign language they are learning. Our goal is for them to be passionate, curious and confident about their own foreign language learning abilities when they finish the primary school phase of their education.

We will help them develop and demonstrate substantial progress in the 5 key language skills necessary for learning Spanish:

We have Partnered with Ceip Parque Eugenia de Montijo school in Madrid and communicate regularly with them via Skype calls, cards and pen pal letters which pupils write in Spanish. 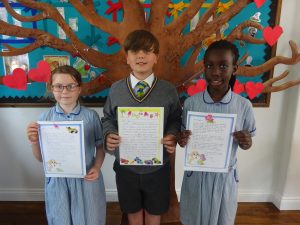 Our Spanish Day was enjoyed by all Students who came to school dressed in either the colours of the Spanish flag, or traditional Spanish Dress.

In a special Spanish-themed assembly Students were treated to a taste of traditional Flamenco dancing and communicated Ceip Parque Eugenia de Montijo in Madrid via Skype.

Señora Higham offers a French after school club on Tuesdays for 1 hour targeted at KS2 students. It enables students to learn a second language and also uses the Language Angel tools such as videos, songs, worksheets and games. This club also supports students coming from other schools to continue with French.

Spanish Club takes place on Monday Lunchtimes for pupils in Years 3-6 and is run by Ms Ladiao to help pupils further develop their language skills.

Our Year 6 Pupils are invited attend Latin Club on Monday lunchtimes with Mrs Khan. Looking at Latin as the basis of modern European Languages, Pupils are offered an introduction to the Latin language and the culture of Roman Britain.